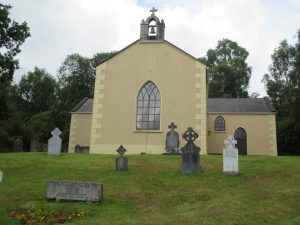 On 19th November 1864, the church in Greenane was dedicated to St Columba.

St. Columba was born in Gartan in Co. Donegal in the year 521 AD . After he became a monk, St.Columba (who was also known as Columcille) founded many monasteries across Ireland and Scotland. He died on the island of Iona in 597.